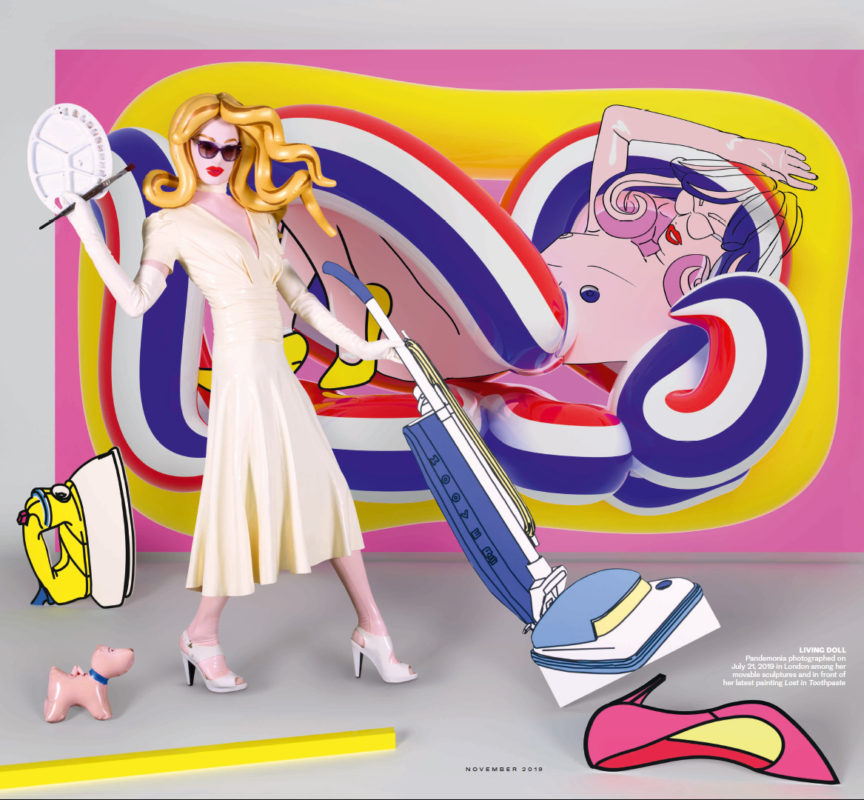 Artists in their Studios

Photograph and words by MARYAM EISLER.

Why post-Pop? Because Pop alone is just “pastiche and the Pop art genre but is digital in its inception. As a concept, the work “interacts with culture” and is able to jump mediums and styles. The identity behind the mask also purposefully remains a secret: “A nom de plume gives me vital space to observe the world. In our digital age, we still need mysteries. Not everything should be available on Wikipedia!”
The artist began Pandemonia during the burgeoning signs of social media. In a world of 24/7, the old art world paradigm no longer stands. “Art needs to flow across space and place; it’s about creating a new vision, one which is no longer locked up in the confines of the gallery walls,” she says. A misunderstood artist? Perhaps. Pandemonia’s oeuvre can pose as one thing but be another, “a modern-day Trojan Horse of some sort,” as she puts it. The work has a good dose of situationalism in its genes. “Some people take what I do at face value, and others may think about it. But that is the very idea of art, is it not? It lies in the eye of the beholder.”
Why the name? A direct descendant of pandemonium, a cross between confusion and destruction, culminating in creative combustion. “When I first started, I was going out and looking for cracks in the pavement of society; I went ploughing through them. Things shift around us all the time, and it is important to see how people react to these shifts. That is the true function of art.”
An artist on the cusp of advertising, art and people, Panda believes that the line between the commercial and the private worlds are now blurred. She’s also a firm advocate of the artist’s own hand at work. “There is something promethean about making art. One is bringing something out of nothing. Furthermore, the act of creation affects and informs one’s ideas; those come through in original work. Part of art’s charm is that it is made by artists. It’s the human touch reaching out to us across the centuries. It is always the painting that was actually painted by Rembrandt or by da Vinci that is the most sought-after, is it not?”
Her new adventures in painting are led by the utopian idea of absolute freedom: “Painting,” she says, “offers freedom from the physical world. Passing through the picture plane, Pandemonia is unshackled from the here and the now, cast adrift to explore new realms of ideas.” Pandemonia is now a powerful brand, an opinion maker, an influencer in the form of a three-dimensional drawing, a “myth” as she likes to refer to herself, which she has fully inhabited, operated and experienced from all sides. To her, Panda represents “the Other,  the unattainable”. What is for certain is that the character reflects our times, one who has the ability “to write her own story across the media”, from the real to the virtual, and vice versa .